The church year progresses through a series of seasons each with its own spiritual emphasis. As the seasons change, so does our order of worship as well as the sanctuary décor. Please check the church calendar for exact times of events and worship services.

Our tradition has been to hold two services on Christmas Eve – late afternoon and early evening. Festive décor includes candelabras mounted on centre aisle end of the pews. Each worshiper receives a candle to light at the close of the service as we sing Silent Night. Verses are sung in German, Swedish, Spanish and English to reflect both the congregation’s predominant cultural roots and present membership.  White is the liturgical colour for the season of Christmas.

Ash Wednesday marks the beginning of the season of Lent which is signified by purple paraments. It falls in mid-February or early March depending on the date of Easter Sunday. We hold a service in the evening which includes the imposition of ashes.

During the six weeks of Lent, we gather each Wednesday evening for a modest meal of soup and bread provided by various groups within our church community. Following the meal, we move into the sanctuary for a time of reflective meditation using the liturgy of Holden Evening Prayer. 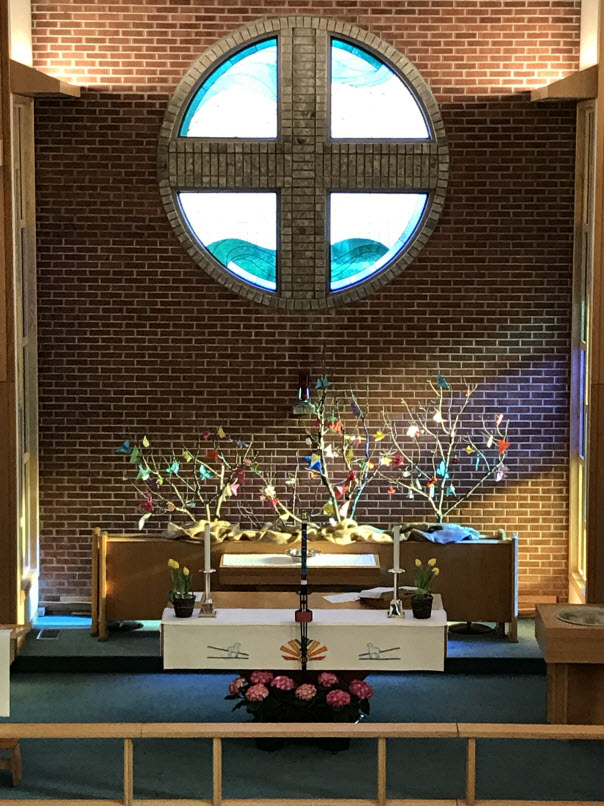 Holy Week begins with Palm Sunday when we remember Christ’s entry in Jerusalem with a procession of palms. We come together on Thursday evening to share a meal and mark Christ’s last supper with the disciples. An informal communion service is held around the dinner tables. Following the meal, the sanctuary is stripped of all its adornments in preparation for Good Friday.

On Good Friday morning we hold a Tenebrae service. Readings and meditations on Christ’s last words from the cross are interspersed with hymn singing accompanied by an ensemble of musicians.

Easter Sunday celebrates the resurrection of our Lord. We have both an early and late service. Worshippers enjoy a time of fellowship between the services when a light breakfast is served.

Ascension Day falls on a Thursday 40 days following Easter and marks Christ’s ascension into heaven after his death, burial and resurrection. At St. Mark’s, we celebrate this day with a festival of music. Musicians and choirs from churches across the city are invited to perform.

Celebrated on the last Sunday in October, Reformation Sunday marks the anniversary of Martin Luther’s posting of the 95 theses on the doors of the Castle Church in Wittenberg in 1517 and the setting in motion of the reformation movement. Red paraments are used for Reformation Sunday.

All Saints Day is celebrated on the first Sunday in November. In the Christian church, it is a day set aside to celebrate all the saints who have preceded us here on earth.  At St. Mark’s, we take time to honor all those members who have entered eternal life in the past year as well as loved ones who are no longer with us here on earth. Worshipers are invited to bring a flower and place it on the altar as a symbol of remembrance.